14.08.2019
NEW ALBUM AND TOUR COMING UP!
We have decided to make physical copies of our last album "Skogen" (with Anne Hytta) which came out last year on PLING MUSIC. But to make it a bit more exclusive, we've decided to make it a double album which will include a live recording of some of the same material from our concert in Tomba Emanuele in november. It's called SKOGEN/ASKEN.
We are going on tour to Denmark and Germany to launch the album. It will only be available on CD, and can be bought in gigs , or ordered directly from us. Check out the upcoming events section for more information!

11.06.2019
FINISHED FIRST LEG OF THE DiSko-PROJECT
What a ride! We've taken part in a research-programme that looks to explore new possibilities and avenues to providing cultural content to schools and student in Norway. So, over the last 4 months we've spent 6 days in a school trying to get 60 14 year-olds to work together in groups on making an art-hall exhibition with emotions as the over-riding theme. From being more than a little sceptical to the project (like only 14-year olds can), they have pulled themselves together and have worked super-hard, and they were more than a little surprised at the result. The project involved both art and music and was a collaboration with teachers at the school. We're looking forward to the next leg this coming autumn!

11.04.2019
PARALLX+NEON TOUR
Just finished three dates with Parallax+neoN and our piece "Flimmer" - this time with Ingunn Fjellang Sæther on visuals. It's really coming together and has taken on a life of its own. A lot of fun!

02.03.2019
STARTED NEW PRODUCTION: "THE POND"
We finally got started with our new project for kids with Evelina Dembacke! For now it involves a lot of instrument building and figuring out technical solutions to the visual side of things. It's still early days, but we're seeing the contours of something very cool and exciting :-) We'll have to have a long break though - Evelina is expecting a baby shortly (Congratulations!!) So it'll be almost year before we can continue.

20.02.2019
WORKSHOP WITH NMH-STUDENTS
We just spent two days with som 15 students from Norges Musikkhøyskole to try and give them some input on how to improvise and make music together the Parallax-way :-) Teaching is a lot of fun when you have students of such a caliber!

12.01.2019
HAPPY NEW YEAR, AND NEW PROJECT WITH NMK
We just had a great week learning and performing three pieces we've comissioned from nyMusikk Komponistgruppe. Pieces by Amund Røe, Ernst van der Loo and Tine Surel Lange. It's been a great learning experience for us, and we hope to do more of the sorts in the future! Here's an excerpt of Amunds piece "Dimensjonaliteter": 29.11.2018:
TOMBA EMANUELE W/ANNE HYTTA Once again we have played in the ever amazin Vigeland Mausoleum in Oslo. Only this time we did it with Anne Hytta on fiddles, AND it was all filmed and recorded. Should be out sometime next autumn! 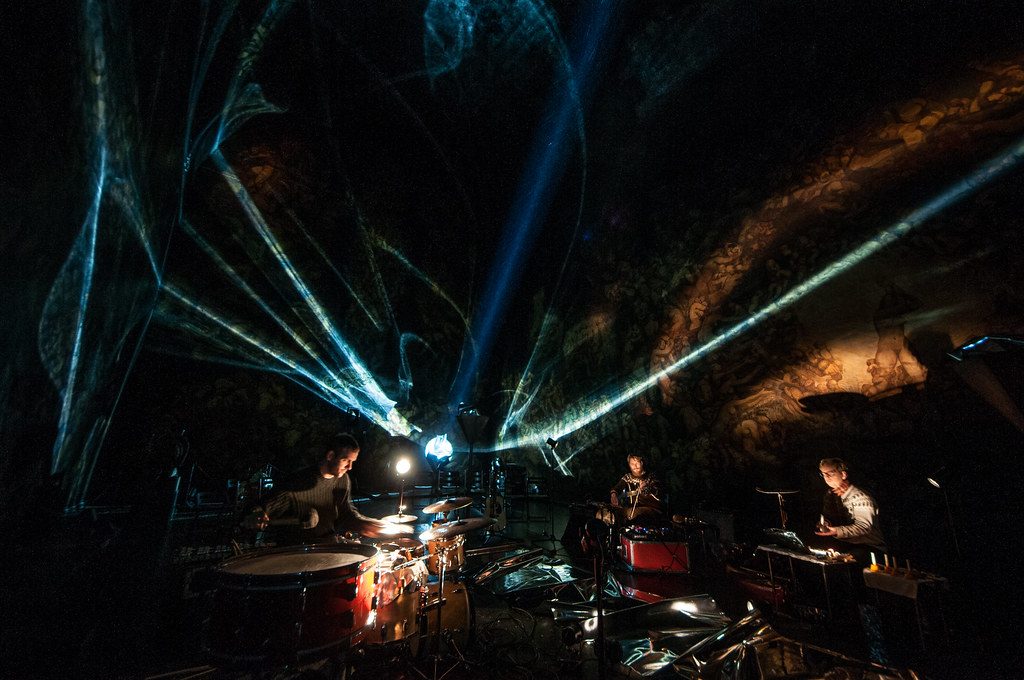 10.11.2018:
RECORDED "FLIMMER" WITH PARALLAX+NEON We recorded our collaborative piece "Flimmer" with Ensemble neoN today. Both audio and video - looking forward to mixing and editing the video. Should be out by spring next year - watch this space!

06.11.2018:
TAKING PART IN RESEARCH PROJECT DiSko
Looking forward to a couple of introductory days to Disko a research project on new approaches to producing art for young people  in collaboration with Kulturtanken and Høyskolen i Vestfold. Should be interesting.

05.11.2018:
WORKING WITH NYMUSIKK KOMPONISTGRUPPE
We finally started work on our project with NMK today. First composer out
was Amund Rød who took us to some new musical areas - a lot of fun exploring
acoustic ways of producing distortion! Looking forward to working with Tine Surel
and Ernst van der Loo as well :-)

04.11.2018: ICELAND FTW!!
We're just back from 10 great days in Iceland! A huge thank you to Hafdis Bjarnadottir for organizing everything perfectly. 4 gigs, 1 album recording and 1 multimedia installation collaboration later we're tired but extremely happy :-) Looking forward to the continuation!

25.10.2018:
OFF TO ICELAND
We're looking forward to going back to Iceland tomorrow! We'll be playing at Northern Wave Film Festival in Rif, the church in Husafell,  Akranes light house and Mengi in Reykjavik.  And we'll be doing ad hoc and pop-up concerts as well. Looking forward!

20.09.2018:
WORLD PREMIERE @ ULTIMA:
"Flimmer", the result of our collaboration with Ensemble neoN  premiered to a big crowd at Nasjonal Jazzscene in Oslo last night. Thank you ULTIMA, Norsk Kulturråd, Ensemble neoN and Evelina Dembacke for making it all possible! Looking forward to recording it in Moss in November! There will be an album coming out next year, so watch this space! 28.05.2018:
ANNIVERSARY AND RELEASE TOUR DONE:
A big thank you to everyone who came to our 10-year anniversary party on the 16th of May! It was a blast :-)

16.04.2018:
PARALLAX+HYTTA ALBUM DONE:
It's a wrap! We're all set for the big anniversary and album release on the 16th of May! A big thank you to Fridtjof Lindeman for excellent recording/mixing/mastering, and Anders Grønseth for releasing it on his label www.plingmusic.no.

22.03.2018:
FUNDING FOR NEW PROJECT: THE POND!
Norsk Kulturråd has granted us money to produce a new project for kids. Thank you very much! It is a collaboration  between Parallax/Evelina Dembacke, Mariano Bulligan and Marco Carrino in conjuction with the Italian organisations Mus-e Italia Onlus and The    Peggy Guggenheim Collection in Venice.   The project will present children to central works from  the Guggenheim collection  with reworking of central compositions from the art-music of the 20th century. Early days still, but very exciting!

20.02.2018:
FIRST DAY OF ENSEMBLE NEON COLLABORATION DONE
We've had our first rehearsal with Ensemble neoN, and it's gonna be a good one! Also: it looks like we may have a deal with a major festival for the world-.premiere of our piece(s) in September. Fingers crossed!

30.11.2017:
USA/CANADA WITH ANDERS TVEIT
Thank you everyone who came out and supported our gigs and workshops on our North-American adventure. We had a blast, met some great people, played a lot of music and spent too much time  in  our Ford Expedition..

26.10.2017:
FUNDING FOR NEON-RECORDING
Thank you FFUK for helping us fund recording the neoN-project next year.

26.10.2017:
NEW ALBUM RECORDED -IT'S GONNA BE A GOOD ONE!
It's a wrap! We just had three very productive days in with Anne Hytta (Hardanger-fiddle) and Fridtjof Lindeman (recording).  The album will likely be launched on the 16th of May 2018, exactly 10 years after the first time we ever played together.

06.10.2017:
RECORDING ALBUM WITH PARALLAX+HYTTA THIS MONTH
We are in the last stages of preparation for our upcoming recording-session with Anne Hytta. Once again we are going far into the autumnal  Oslo-forest  in search of magic. 3 days in Østmarkskapellet should do the trick.  Looking forward!

22.09.2017:
FUNDING FOR NEON -COLLABORATION CONFIRMED!
A big thank you to Norsk kulturråd for  funding  composing for, and producing the project. We are very much looking forward to getting started this autumn!

14.06.2017:
TOUR IN THE U.S. AND CANADA CONFIRMED
All the dates are confirmed and we got word today that all the funding is in place. A BIG thank you to  Music Norway, Norsk Kulturråd and Fond for Lyd  og Bilde! We're doing a series of lectures and concerts in universities and colleges with  Parallax+Tveit, and will also be joined by NOTAM's Jøran Rudi who will contextualize and talk about Norwegian electro-acoustic music.  Have a look at the upcoming gigs for more info.

16.05.2017:
NEW WEBPAGE AND OUR 9-YEAR ANNIVERSARY
Today it is exactly 9 years since the three of us played together for the first time. 9 amazing years that have given us some fantastic memories of music, people and places all over the world. A huge thank you to everyone who's taken part in the journey so far!! And to our patient and understanding wives and families!  But we've only just started, and there's a lot more in store in the next few years. With a new project with Ensemble neoN, two albums in the pipeline, a tour of concerts/masterclasses  in  eastern USA and our 10th anniversary  festival/tour coming up, it's   gonna be a lot of fun! So, welcome to the new and improved website! It's work in progress, but we like it :-) Have a look around, and don't forget to check us out on facebook, flickr, youtube and vimeo. Just click the icons in the top right corner. Have fun!